It was a warm June evening in 1942. Suddenly the quiet of that evening was disturbed by the ringing of a telephone. It was like the ring of any other telephone heard a thousand times, and yet this ring was different. It signaled the beginning of a history, a history of service to those in need by the District Heights Volunteer Fire Department.

Shortly after the start of World War II, a young man living in District Heights named William H. Wells Jr. (Pappy) became an auxiliary fireman at D.C Engine Company 19 on Pennsylvania Avenue in Southeast Washington D.C. Stationed at Company 19 on Pennsylvania Avenue in Southeast Washington D.C. as a regular D.C fireman was another District Heights resident, Abner P. Burgess. It was not surprising that as these two men concerned themselves about fire protection for Southeast Washington D.C they began to discuss a thought that both of them had for some time, fire protection for the area of Maryland in which they both had their homes.

The people in District Heights, like people throughout the county, were concerned with winning the war. Few thought about their own fire protection. If there was a fire, fire engines would come. They were sure of that. How far they would have to come, how long it would take them to get to District Heights these things they failed to think about.  But Bill Wells and Abby Burgess thought about it and they were determined that District Heights should have its own fire department.

Right after the town meeting Bill Wells invited interested citizens to his home (now 7112 Gateway Boulevard) to start planning for the department. Besides Bill and Abby a number of citizens came, including Bill Marshall, R.E Throckmorton, J.W Orndorff, Walter Powers and George A. McGhee. Nothing could be done without money, so plans were made to raise funds. All during the spring and summer of 1942 the group used every means they could think of to a raise as much money as possible. They collected paper, they held dances, they sold boat-ride tickets and they held a carnival which netted $ 1,300. But they still had no fire house and no fire engine.

Here the name Bradley T. Johnson must be mentioned for it was his generosity that solved the first problem. On his property he had the foundation of a garage. It was about three cinder blocks high but with no floor, there was grass growing in the center. An agreement was reached whereby the fireman would finish building the garage which they could then use for a temporary firehouse until they obtained a permanent home. There exists today in the fire department archives a contract signed by Mr. Johnson leasing his garage to the fire department for a dollar a month.

Throughout the years membership expanded, new apparatus were bought and the citizens of District Heights were served. In October 2008 the department moved into and dedicated the new $5 million station, located about a mile west of the old station. Station 826 is a 13,000 square foot one story building that features four double drive thru bays, office space, living space, exercise room and a training room equipped with the latest technology. The station is also equipped with a first-in alerting system utilizing cardiac kind ramped tones, human voice and lower intensity red lights visual indicators. The new station was dedicated to Chief Thomas (Tommy) Stommel for over 50 years of dedicated service.Today the department is under the command of Volunteer Fire Chief Jamal Brooks.The stations appartus includes Engine 826, Engine 826B and Tower 826. The station also houses Ambulance 826 A/B, Medic 826, Battalion Chief 3 and the Southern EMS Supervisor. The station is manned 24/7 by 10 career personnel along with the departments volunteers covering a first due area of about 4 and a half square miles. The District Heights Fire Department, with over 67 years of service, has kept pace with the ever changing conditions and work load in and around District Heights with dedicated people like Chief Stommel and the men and women who make up the District Heights Fire Department. 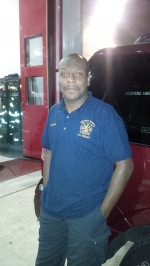 Copyright © 2006-2021. YourFirstDue Inc. All Rights Reserved. Designated trademarks and brands are the property of their respective owners. Content on this web site is supplied by District Heights Volunteer Fire Department. YourFirstDue Inc. cannot be held responsible or liable for any content, text, pictures, or any other media found on this web site. Maintained by the members and staff of District Heights Volunteer Fire Department.
Management Login
Powered by